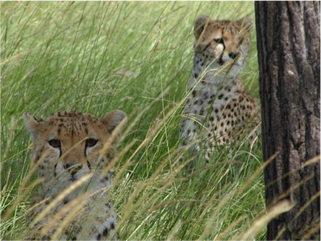 The Maasai Mara National Reserve, in south-western Kenya, has been described as one of the best animal reserves in Africa.It is named after the Maasai people their description of the area when looked at from afar: "Mara", which is Maa (Maasai language) for "spotted," an apt description for the circles of trees, scrub, savanna, and cloud shadows that mark the area.

It is famous for its exceptional population of big cats, game, and migration of zebra, thomson's gazelle, and wildebeest from the Serengeti every year from July to October, a migration so immense that it is called the Great Migration and the 7th Natural wonder of the world. They pour across the border into the Mara, making a spectacular entrance in a surging column of life that stretches from horizon to horizon. At the Mara River they mass together on the banks before finally plunging forward through the raging waters, creating frenzy as they fight against swift currents and waiting crocodiles. The wildebeest bring new life to the Mara, not just through their cycle of regeneration of the grasslands, but for the predators that follow the herds.

The Mara has been called the Kingdom of Lions and these regal and powerful hunters dominate these grasslands. Cheetahs are also a common sight in the Mara, as are Hyena and smaller predators such as Jackals. The Mara is an awesome natural wonder, a place where Maasai warriors share the plains with hunting lions, a place of mighty herds and timeless cycles of life, death and regeneration.

LODGING
We offer accommodation for all - from luxury lodges, tented camps, to budget accommodation and camping both within and outside of the Reserve.

All of our safaris include a professional safari guide, a 4WD safari vehicle and park fees