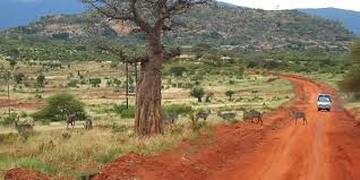 The combined area of Tsavo East and West make the largest wildlife reserve in Kenya, and one of the largest in the world. These parks, known for their orange colour, beautiful landscape and proximity to the coast, make them some of the most popular safari destinations in East Africa.

TSAVO WEST
Tsavo West is the most visited park of the two is a vast 7000 square kilometres of plains, dotted with volcanic cones and forests at the water's edge. The lions, descendants of the "man-eaters of Tsavo" are in abundance, as well as zebra, giraffe, huge herds of buffalo, and elephants covered in the iconic orange dust. Two of the biggest attractions of Tsavo West are the Rhino Sanctuary and Mzima Springs- where you can walk around freely as elephants and predators rarely visit the springs. Tsavo West also is full of lava flows, caves and craters- including Chaimu Crater- where you can climb up to the crater rim for magnificent views of the park.

TSAVO EAST
Tsavo-East is one of Kenya’s oldest and largest National Parks: covering approx. 40 per cent of the total area of all Kenya’s National Parks. . It is accredited as one of the world’s leading biodiversity strongholds, bushy grassland and open plains alternate with semi-arid acacia scrub and woodlands. Green swathes cross the park where the river banks give raise to lush vegetation. The park has stunning attractions and in particular the Mudanda Rock and the Yatta Plateau, the world’s largest lava flow. Lugard Falls on the Galana River are remarkable for the shaped water-worn rocks.  The wildlife include elephant (known for their glow red dust baths), rhino, lion, leopard, crocodile, waterbuck, kudu, gerenuk and zebra and Hunter’s hartebeest can be seen with its lyre-shaped horns.  Some 500 bird species have been recorded in the area, including ostrich and some migratory kestrels, while buzzards stop at Tsavo-East during their long flight south

All of our safaris include a professional safari guide, a 4WD safari vehicle and park fees