Come climb the Mountains of the Moon!
The Rwenzori Mountains, previously called the Ruwenzori Range and sometimes the Mountains of the Moon are located on the border between Uganda and the Democratic Republic of the Congo.  The Rwenzori is one the highest mountain ranges in Africa due the elevated peaks of Point Margherita (5109m) and Point Alexandra (5083m) on Mount Stanley. The entirety of the range is about 120 kilometers long and 65 kilometres wide. It consists of six massifs separated by deep gorges: Mount Stanley (5,109 meters), Mount Speke (4,890 meters), Mount Baker (4,843 meters), Mount Emin (4,798 meters), Mount Gessi (4,715 meters) and Mount Luigi da Savio (4,627 meters). Mount Stanley has several subsidiary summits, with Margherita Peak being the highest point. Rwenzori ,close to its local name Rwenjura, means ‘rain maker’ or ‘rain mountains’ in the Bakonjo language. The Baganda, who could see the mountain range from far, used to call them ‘Gambaragara’, which means ‘My Eyes Pain’, a reference to the shining snow. 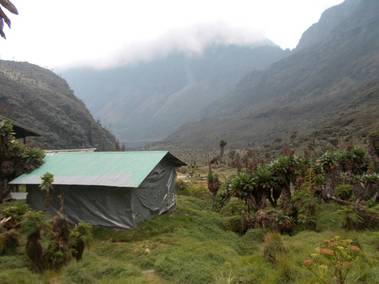 The Central Circuit route begins at Nyakalengija village (1615m) and is approximately a 6 to 7 day hike. The route starts with a fairly easy hike to Nyabitaba Camp (2650m) where there are many primates and elephants. On the second day, the trail begins with a steep descent to cross the Mubuku River, passing a muddy, slippery trail through the bamboo forest. A mix of gradients is experienced through the bamboo, lichen and heather zones to John Matte Hut (3505m) where you will get a view of the majestic Margherita and Alexandria peaks. The third day of the trek is through wet and strenuous the Bigo Bog zone, there are a few boardwalks, but much of this part of the hike requires gumboots and hiking poles. After climbing the steep ascent to drier ground, you reach Lake Bujuku with lovely views of Mt. Baker, Mt. Stanley and Mt. Speke, and then to Bujuku Hut (3962m). The fourth day the route climbs the rocky Groundsel Gully and steep scree slopes to Scott Elliot Pass (4372m) for an unforgettable view of Mt. Speke and Lake Bujuku. The ascent ends at Elena Hut (4541m) which is wedged between two large flat rocks, The fifth is the ascent to Margherita Peak- the roof of Rwenzori!
After your majestic summit, the central circuit descent returns you to Scott Elliot Pass and descends through the Kitandara Gorge to a mountain hut by the twin Kitandara lakes (4023). The six day begins with another steep ascent through the bright yellow moss of Freshfield pass (4282 m) to the Upper Mubuku Valley to Guy Yeoman Hut (3505m). The seventh and final day of the descent is through the thick bog and bamboo forest following the Mubuku River down the cliffs of Karirupea to compel the Central Circuit.

All of our expeditions include a full service crew, a personalised menu and private transfers